“A life with no regrets” best describes that of Jim Beatty who passed away peacefully at his home on October 27, 2019. He was 75 or as he would say 3/4 of a century!  Jim was born on an Army base in El Reno, Oklahoma on September 28,1944.  From there his parents, Kay and Dudley Beatty, older brother Gene, and he moved to Canton, Ohio where he grew up for 18 years.  His life after Canton took him to Miami of Ohio where he joined the Phi Gamma Delta (Fiji) fraternity house and met his wife, Linda.  They were called a “Miami Merger” and were reminded of that with a Valentine every year from the university.  After Miami, he went on to graduate from The Ohio State University Dental School.  A residency in prosthodontics brought him to Kansas City.  Jim then served as a dentist/prosthodontist at the Kansas City VA Hospital for 30 years. Taking retirement from the VA was followed by 13 years teaching at the UMKC Dental School Clinic.  Jim loved his profession and enjoyed working with the students on how to make the “perfect denture”.

Jim would want to be remembered as one who had simple needs.  He never asked for much and gave generously to all of those around him. He loved his family and devoted his life to their happiness.  He appreciated beautiful things whether it be art work, his garden, his finely polished cars, his watch collection, his adorned home that he designed, the mountains of Colorado, or his time in jolly old England. He was creative, witty, a natty dresser, humble, selfless, and put the word gentle into the term gentleman.

Thank you to Elara Hospice & Caring Bridge.  Donations (rather than flowers) in his Honor to the American Cancer Society or Elara Hospice. 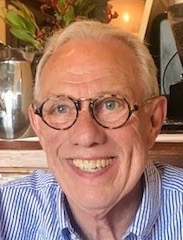 Linda and Family, I was so sorry to read of Jim’s passing, Ken and I still talk about the fun evening we spent with you guys! Please know you are in our thoughts and prayers and wish you peace and comfort. Ken and Becky Emley

Carol and I are so sorry to hear of the passing of your husband, Jim. Prayers for you and your family.