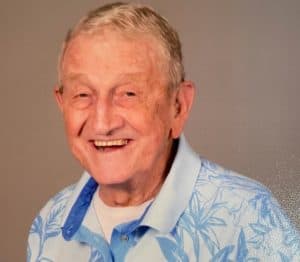 Beloved husband, brother, father, stepfather, and grandfather Al O’Laughlin passed away October 31, 2021, in Kansas City. He was born in 1931 to Charles and Margaret (Grabmiller) O’Laughlin, in Kansas City, Kansas, the third child of seven.

He was a joyous man of great faith, humor, learning, and compassion. Growing up, Al enjoyed the pleasures of country living as he watched his brothers and sisters do the hard work of the family farm. In 1957, he was ordained as a Catholic priest. In 1965, he answered Dr. King’s call to all clergy to come to the South to march for racial justice, where he went toe-to-toe with lawless Alabama state troopers. In 1969, he left the priesthood to marry Robbie Raney. After leaving the priesthood, Al devoted his life to helping others work through their problems by becoming a therapist. Al and Robbie had two boys, Joel and Matt O’Laughlin. Every Christmas morning, he could be heard downstairs shouting, “Hey you in the red suit!” as he wrestled with the intruder bringing gifts to Joel and Matt. In 1981, Robbie died. In 1987, Al remarried Diana Prouty. They remained married until the day he died. He loved all of his family and seemingly every stranger he met (which was usually at Burger King or Culvers).
He was preceded in death by his first wife Robbie Raney, brother Russell, and sister Lorene Mixon. Al is survived by wife Diana Prouty, sons Joel and Matt O’Laughlin (Amy), stepdaughters Jennifer Blanck (Paul), Laura Stowe (David) and Susan Stocking (Garth); nine grandchildren (Anna, Kathleen, David, Michael, Stephanie, Lillian, Beth, Kathleen and Dylan); and siblings Jim O’Laughlin (Carolyn), Ruth Fladung, Kathleen Presko, and Dorothy Franzen (John).

A very delightful man to be around!

Dear Diana and family, I am sad to hear of Al’s passing. I’ll always remember his joyful witness to his faith and his true belief in the future. My thoughts and prayers are with you. Coly Bryant

Dear Diane and Family,
Whenever we were in Al’s presence we knew there would be lively, thought-proving discussions. Although Theology was his strength, he did not shy away from current events and other controversial subjects. We will miss his impromptu continuing education “classes” on the Catholic Church. On a personal note, I benefited from his wit and wisdom as a student at St. Teresa’s Academy.
We send our Prayers for Peace and Stamina as you navigate through these next few weeks. We will always consider ourselves blessed with the gift of his presence in our lives.
Pat and Vicki Saviano

He was a great man! I remember well his sermons on civil rights and social justice upon his return from his trips to the South when I was a student at St. Peter’s. He was a kind and gentle soul who taught us well.