Donald F. Dors, 94,  passed away peacefully September 25, 2020 after living a long, full life. Don was born in Milwaukee, Wisconsin on February 22, 1926 to Ed and Helen (Knudten) Dors. He was drafted into the Army in the 1st infantry Division of the Big Red One immediately following high school and served in Europe (France & Germany) during WWII. He received the Purple Heart after being wounded while serving in Germany. He then met the love of his life Patricia (Hawkins) Dors and they were married at Gesu Church in Milwaukee on October 15, 1955.  Don worked for the family business, Knudten Brothers Color Center, and in 1960 transferred to Prairie Village where he worked for Colony Paint/Valspar, retiring in 1991.  Don and Pat became involved members of St. Ann’s church for 30 years raising their four children. In 1990 they moved to Overland Park and became members of Ascension church, where again they were actively involved. Don was a Knights of Columbus member and developed many lasting friendships. Don and Pat were charter members at Leawood South CC and were avid sports fans. They were KC Chiefs season ticket holders at Municipal and Arrowhead Stadiums. Don never missed watching the Green Bay Packers on TV. He loved their lake house in the Ozarks and enjoyed his weekends there with family and friends. In 2008 Don and Pat moved to Santa Marta Retirement Community where they embraced another new family. Don was one of a kind, soft spoken and loved by all who had the pleasure of knowing him. Don loved his family, sports, refinishing furniture, painting, travel and “dad jokes”.

The family would like to thank the entire staff and community at Santa Marta for their love, support and care of Don, especially over the last few months.

In lieu of flowers, memorials may be made to Head for the Cure Foundation1607 Oak St.  Kansas City, Mo. 64108. https://www.headforthecure.org/content/donate

A private family Mass of Christian Burial will be held around the Thanksgiving holiday.  Assistance provided by Funeral Advocates, LLC. 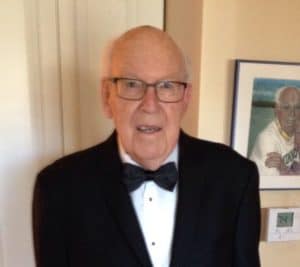