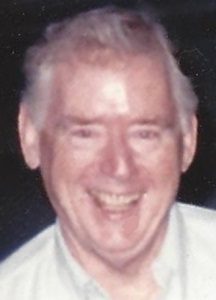 Edward Allen Rice, 97, died Sept. 16, at St. Joseph Medical Center in Kansas City, Mo. Ed was a proud World War II veteran who served in the Pacific Theater and was part of the force occupying Japan.

Ed loved his country and his fellow WWII veterans deeply, so much so that he once rejected reading Tom Brokaw’s “The Greatest Generation” because he was too overcome by emotions he began to read.

His other great love was his significant other of 46 years, Marjorie Anne “P.W.” (Fischer) Dozier, who preceded him in death by about three weeks.

The child of Mr. and Mrs. Edward Rice, Sr., of Blytheville, Ark., Ed graduated in 1950 from the University of Missouri-Columbia with a Bachelor of Science Degree in Electrical Engineering. Ed spent several years working as an engineer with various gas pipeline companies before founding his own engineering firm. His projects included a major renovation of the Johnson County Executive Airport and a water treatment facility for Greenwood, Mo.

Ed’s many interests included his much loved German Shepherds, reading everything from fiction and poetry to quantum physics and genetics, target shooting, computer animation, dancing with P.W., having a nip with his friends and relaxing on his front porch on cool, quiet evenings.

In his later years, Ed made a concerted effort to remain sharp mentally by studying differential equations, nuclear physics, Latin and Greek. He frequently recited poetry. One of his favorite verses, from Omar Khayyam, seems fitting: “The Moving Finger writes; and, having writ, Moves on; nor all thy Piety nor Wit Shall lure it back to cancel half a Line, Nor all thy Tears wash out a Word of it.”

Lived across the street from Ed for 18 years, he watched my children grow up move out and became family to us ❤️
Though his gruff edge he was a gentle giant that embraced our family. He allowed my daughter in her elementary years to be the first and only person to interview him about his experience in the war. She wrote a paper then read to him after she got an A. Rest in peace
From the Gilmores