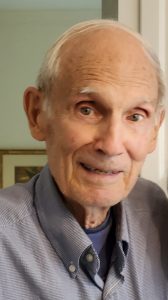 Emil was an Eagle Scout and his proudest accomplishment was his role as scoutmaster of troop 91 in Prairie Village, Kansas. He told stories of the transformation of the young scout’s confidence as they back packed in Philmont, New Mexico and canoed in the lakes of Canada. He was also so proud that many of his scouts later became scoutmasters.

He is survived by his wife Shirley, older sister Sue Hamilton, and his children Emil Schutzel (Lynn), Bill Schutzel, Kurt Schutzel (Amy), Elizabeth Speer (Thane) and his nine grandchildren, as well as his best friend since childhood, Banny Tapp. Family and friends are invited to Colonial Church, 7039 Mission Road, Prairie Village KS, 66208 on Tuesday December 6, at 10:00 am to honor Emil’s life. A reception will follow.  In lieu of flowers memorial contributions can be made to Toys for Tots

Priceless.
Praying for peace in your heart and love to surround you, Miss Elizabeth, and all your family and friends.
Connie Sue

Elizabeth
,
Wow! What an accomplished life your Father led! I am so sorry for your loss. You are in my thoughts and prayers.

So sorry for your loss. Praying for your family and friends!

I’m so sorry for your loss. Thinking of you and your family.