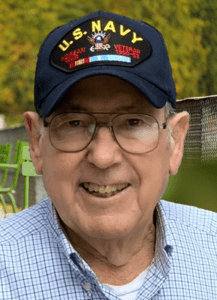 Frederick S. Jehle (85) of Lawrence, KS passed away peacefully in Kansas City, Missouri on August 1, 2021. Fred was born in Kansas City, KS on December 26, 1935 to Katherine and Joseph Jehle and was the middle of three children.  Fred spent most of his school years in Emporia, attending Sacred Heart, Emporia High School, and later graduated from what is now Emporia State University.

In 1954, Fred enlisted in the U.S. Navy, where he spent four years.   In 1960, he married his wife of 61 years, Margaret Ann Becker. They had three sons, Robert, Charles, and Jeffrey. During the span of their married life, they lived in Wichita, Hutchinson, Emporia, Topeka, and finally settled in Lawrence in the 1980’s.  For many years, he worked as a bond salesman and later worked in sales for Motorola Radio.  Fred was a proud veteran and had many interests including dancing, music, boating, and his favorite- fishing. He was a member of St. John the Evangelist Catholic Church, and was a dedicated husband, father, and grandfather.

A memorial service is scheduled for Friday August 27 at 10:30 a.m. at Sacred Heart Catholic Church in Emporia, Kansas.  There will be a lunch at the church following the ceremony and burial. In lieu of flowers, the family suggests memorial donations to Kansas City Hospice House, 12000 Wornall Rd., Kansas City, MO 64145.

So sorry for your loss. Praying for all of you! You are Loved and Missed.

Fred. What a sweet, kindhearted and ornery man. It hurts my heart to hear he is no longer here. I looked forward to seeing him when we worked at the same company. Then, when he left, we stayed in contact. He and Maggie were so nice to hang out with at Set em up Jack’s. Maggie, please accept my sincere condolences.