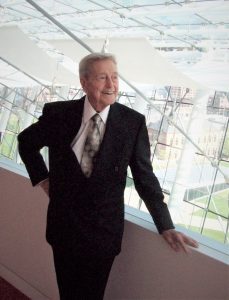 Harold W. Steenbergen, Sr., born December 28, 1927, passed on December 18, 2022.  Harold was born in Russellville to Lawrence and Elsie Grace Steenbergen.  He and his two sisters, Ruby and Ethel Marie, grew up on the farm in Decatur, Missouri near Russellville.  He graduated from Russellville High School in 1944.  He attended summer school at Central Missouri State Teacher’s College and began teaching in a small rural school that fall at the age of 16.  He taught in Lohman, MO in 1945.  Harold was drafted into the Army in 1946.  He taught two more years and was principal of a two-room school in Marion, MO.  He continued college and earned a bachelor’s degree from Southwest Missouri State in 1952.  He began work with City Utilities in Springfield, MO in 1953 as an engineer.  He later retired from the Gas Company as an engineer.

Harold will be remembered for the Christian kindness and friendship he shared with everyone. Animals, children and strangers were drawn to him.  His radiant smile was even notable on his driver’s license.  Harold was a Mason and supported many charities:  Lakota People, Saint Judes Hospital and the homeless in Kansas City.  He portrayed a memorable Santa Claus and Easter Bunny to everyone’s delight.  Being raised on a farm, he had a love for nature and the outdoors.  He enjoyed hunting, building, reading and garage sales.  He enjoyed Bible Study and was a member of the Church of the Resurrection in Overland Park, Kansas.

I am so sorry to hear about Harold! He was such a sweet and loving person. I loved learning family research from him and will treasure every moment and memory we had together. He enjoyed researching the WEST family side> I saved all of his emails and will continue the search>
He was so loved by all> That wonderful welcoming smile. Harolds grandmother and my great grandfather were brother and sister. We had a family reunion at Mount Olive Baptist Church and he was so delighted. I remember him singing to ” I’ll Fly Away” and tapping his toes. He so enjoyed life!!!! Prayers and love to his family, Brenda Thompson Kuensting – great grandaughter of Benjamin Kelly West