On Friday, October 9th, 2020, Hildreth Ellen Stuart nee’ Marquez, loving widow of Robert F. Stuart and mother of three sons, passed away at the age of 95.

Hildreth was born on November 19, 1924 in Kansas City, Kansas to Henry and Eva (Ragsdale) Marquez. During WWII, Hildreth worked at the Pratt Whitney and North American Aviation B-25 plants. A hard worker, she was later employed at National Bellas Hess, AT&T, and Trinity Lutheran Hospital. She was an amateur artist and poet. She loved her family, hens, books, and roses.

We want to thank the wonderful caregivers and nursing staff at Carondolet Manor and the Ascend Hospice Team.

Services will be private but a Celebration of her life will be announced and held at a later date. Assistance by Funeral Advocates, LLC. 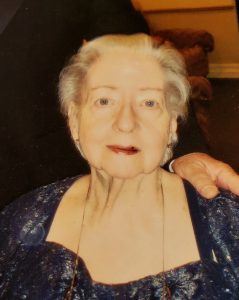 I had not seen Hildreth in a lot of years but I had know her all my life. She was a wonderful lady with a sense of hurmor like no other. IF you have a celebration of life please let me know. Sharon Hendee Landess