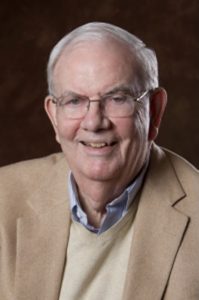 Larry G. Markel, M.D. passed away on January 19, 2021 with his loving family by his side at Advent Health, Shawnee Mission, Kansas.

Larry was born on March 13, 1937 in Great Bend, Kansas to Mary Custer Markel and Glenn Edward Markel.  He attended grade school and high school in Great Bend, KS, graduating in 1955.  Larry was a pitcher on the baseball team and they won the state championship his senior year, which was the first one in the history of the school.

Larry graduated from the University of Kansas in 1960 with two degrees: one from the College of Liberal Arts and Sciences and he obtained a BS from the School of Business.  While at KU, he was a member of Sigma Chi Fraternity and was the president of TNE.

He graduated from the University of Kansas Medical Center in 1964 and completed his residency in Urology in 1969.   While still in his residency, he established the hemodialysis program at KU and was involved in every dialysis case until he completed his residency.  Following completion of his training, he established a private practice at St. Luke’s Hospital in Kansas City, MO. He received a clinical staff appointment at KU and was in charge of the outside residency program for the urology residents.  He was a member of the kidney transplant team at St. Luke’s Hospital.

He went to Bartlesville, OK in 1974, and remained in practice there until his retirement in 2002.  Larry and Kay returned to the Kansas City area in 2013.  While in Bartlesville, he was involved in numerous organizations including the OK State Medical Society, the AMA, the American College of Surgeons and the AUA.  He was a long time member of the Board of Directors of Arvest Bank, the Lyon Foundation and the board of the Green Country Free Clinic.  He was a member of St. John Catholic Church and the Knights and Ladies of the Holy Sepulcher in Jerusalem.  He made two pilgrimages to the Holy Land.  He was a 25-year member of the Royal Order of Jesters, Court 47 of Tulsa. He is also a member of St Michael the Archangel Catholic Parish in Leawood, KS.

He is survived by his lovely wife of the home, Kay Renfrow Markel, a son, Larry Markel, Jr. of Olathe, KS and a daughter Lori Ann Elliott and her husband, Doug of Hutchinson, KS and two granddaughters, Ashley and Allison Elliott, both of Kansas City, as well as a brother, Wayne E. Markel (Shirley) of Edmond, OK.

He will be remembered as an excellent and compassionate physician, a loving husband, father and grandfather, who loved the Lord.

Family services have already been held.  The family suggests memorial contributions to the Parkinson’s Foundation at  michaeljfox.org.

Dear Kay, I just found the obituary and when I saw Larry’s picture I cried. We will all miss him so much. Such a wonderful person and friend. I know your heart is broken but I also know God will provide and comfort you. We will always be here for you dearest friend. Love Mary Lou