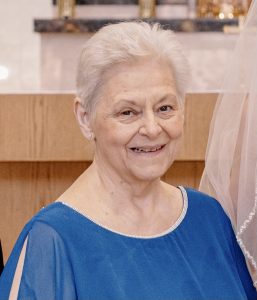 Patricia Ann Deatherage passed away on Sunday, May 1, 2022.  She was born on July 7, 1938, in Kansas City, Missouri, to Richard and Mildred (Andrė) McBratney.  She graduated from Westport High School in 1956 and soon after became a flight attendant for TWA.  While working at TWA, she met Bill Deatherage, whom she married in 1966.  Together they raised two sons, David and Matthew.  Patricia stayed home to raise her boys, then returned to work as a travel agent, spending most of her career at All About Travel.  After years as a travel agent, she joined the company Child Health Corporation of America until her retirement.

Family, especially her grandchildren, brought her great joy.  Many wonderful memories were made on family vacations, and on trips with her granddaughters to dance and ice skating competitions.  She always claimed that she would be around to dance at her oldest granddaughter’s wedding, and that came true for her last summer, where she and Bill tied with one other couple as the longest married couple in attendance.

Patricia was preceded in death by her husband Bill, who passed away earlier this year, parents, brother Michael, and granddaughter Sarah Deatherage.

The family has a private burial planned at a later date at Leavenworth National Cemetery.  They are grateful for the outpouring of love and support of friends and family these past few months.

Patti Deatherage was such a sweet soul.Just a lovely human being .i never heard her say an unkind word about another person. We took our morning coffee together for many years, and saw the love she shared for her children and grandchildren thru her I Pad photos of them. I’m going to miss those good old days . She’s going to be sorely missed

Pat was a joy to work with as our CHCA travel agent and later working in our department. Pat always brought a smile, laugh and a hug. She expressed her love for her children and grandkids so much at work! My thoughts and prayers are with you during this difficult time.

To the family,
Pat was a dear lady and Bill was special too. I worked with them both at TWA and All About Travel. They were fine people and great friends. Sincere sympathy and condolences to all of you.