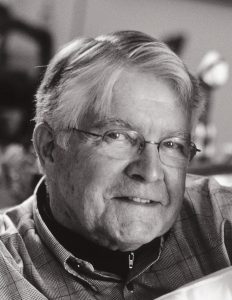 Paul was born on March 9, 1929, in Alton, Illinois, to Gladys Wright Gibbs and Paul Jacob Gibbs.  He grew up in Kansas City, Kansas, where he graduated from Wyandotte High School.  He was a member of Alpha Tau Omega fraternity at the University of Kansas, and graduated with a degree in Industrial Management.  He later received an MBA degree from the Executive Fellows program at Rockhurst University.

Charlene Lashbrook Gibbs, Paul’s wife, best friend, and love of his life, asked him on their first date as juniors in high school.  They married as seniors in college at St. Paul’s Episcopal Church, Kansas City, Kansas, and were married for nearly 65 years.

Paul served in the United States Air Force during the Korean War and was honorably discharged as a 1st Lieutenant.  He worked for Hallmark Cards for 35 years starting as an Industrial Engineer.  He was the Greeting Card Manager at the Lawrence Production Center, the Manager of Industrial Engineering in the Kansas City Corporate Office, and the Director of Operations for Coutts/Hallmark in Toronto, Canada, including the responsibility for the construction of a new manufacturing facility.  He was the Plant Manager for the Kansas City Production Center and retired as the Corporate Director of Materials Management.  After retiring from Hallmark, he was Vice President of Broadway Industries Commercial Hardware Division and later did consulting work for other companies.

Paul was a past Harris Fellow Member of Rotary Club 13.  He was a charter member of the Kansas City Industrial Engineering Society.  He served on and was Senior Warden of the Vestry of St. Michael and All Angels Episcopal Church. He did volunteer work for the United Way of both Kansas City and Lawrence, Kansas.

Paul was preceded in death by his wife, Charlene, his parents, and his sister Leatrice Starry.  He is survived by son Scott Gibbs and wife Anna of Durango, Colorado, their sons, Paul J. Gibbs and wife Samantha, John W. Gibbs and wife Meghan, all of Los Alamos, New Mexico, son Steven Gibbs and wife Narda Lebo of Crested Butte, Colorado, and daughter Carolyn (Carrie) Gibbs Nelson and husband Rick of Atlanta, Georgia.

A remembrance service will be held June 11 at 10:00 am at St. Michael and All Angels Episcopal Church, 6630 Nall Avenue, Mission, Kansas, 66202.  In lieu of flowers, the family suggests donations to St. Michael’s and All Angels Episcopal Church or Research to Prevent Blindness in memory of Paul W. Gibbs, at  http://bit.ly/Donate2RPB or Research to Prevent Blindness, 360 Lexington Avenue 22nd Floor, New York, NY 10017.