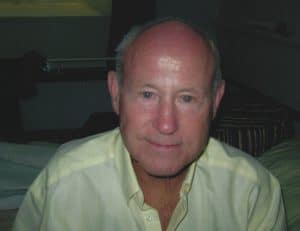 Robert A. Closser Jr. died on March 17th, 2021. He was 91 years old. Surviving are his wife of 67 years, Ann Whittier Closser who truly was his best friend; son Robert A. Closser III of Hailey, Id and his daughters Avery and Rosa Quinn; son David A. Closser of Boulder, CO and his son Daniel Closser; daughter Mary Ann Closser of Park City, UT and her sons Estin and Clay. Also, his sister Barbara Kansteiner of Windsor, CO. He was predeceased by his parents Robert Closser and Louis Meyer Closser.

Born in Kansas City, Bob attended Hale H. Cook elementary, Southwest high school and graduated with a BA in business and engineering from Dartmouth College. He served in the US Coast Guard as a deck officer during the Korean War and became a Lieutenant Commander. His entire career from working in the plant to upper management was with Sherwood Solvents and later Union Oil of California. Upon retirement he was active in the travel business for 27 years.

He was an Eagle Scout and later a scout leader, a Sigma Chi, a director of Native Sons and Daughters of Kansas City and a Vanguard Club member. Bob served on the City Council of Mission Hills, KS and was member of Mission Hills Country Club for 65 years.

A man who tried hard to be a good Christian with a positive attitude and a strong faith, he enjoyed a full life. He loved to pole vault in high school and college and skied for 65 years. Canoeing was one of his favorite activities from the white water of Vermont, the boundary waters of northern Minnesota and the many streams throughout the Ozarks. He loved adventure and was drawn to activities such as scuba diving, hang gliding, para sailing and ultra-lights.

Ann and Bob enjoyed many years of travel including cruises, the America’s Cup in Australia, the Winter Olympics in France. Also traveling throughout Europe, the Caribbean Islands and Japan. They spent many summers at their family-built log cabin in Colorado and winters in Kauai.

Bob particularly enjoyed and appreciated his good friendships, his many decades skiing with the same ski buddies and the numerous canoe trips with friends and family. He enjoyed the numerous family reunions with his 3 children and 5 grandchildren.

He was appreciative of his folks, finding the money to send him to Dartmouth where they taught individualism, how to be an independent thinker. Through his years he was viewed as somewhat of a “Maverick” and a bit strange, by his wife, and close friends. But it was more in his nature to lead, than to follow.

A memorial service will be held at the Village Church, with the date yet to be determined. In Lieu of flowers, please donate to your favorite charity.

The family has put together a slideshow that can be viewed at the following link: https://drive.google.com/file/d/10hCsdtBDkiMC5wauHiojh5iuRNQvsSHw/view?usp=sharing

It was Robert’s wish to have The River by Garth Brooks played at his funeral. Robert’s grandson recorded this for him: https://drive.google.com/file/d/1S52Do-75FnLgaTllqnDkiiZxnCjYr_M0/view?usp=sharing