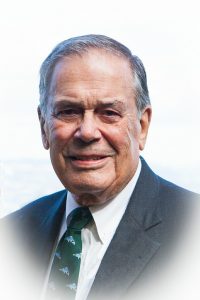 “Bob” was born in September 8, 1932, in Lafayette, IN, to William and Lucile Kohlmeyer. He moved to Brookings, SD, in 1942 where his father was a professor at South Dakota State University. He graduated high school in 1950 and went on to attend Princeton University from which he graduated in 1954 with a B.A. degree in History. At Princeton, he was a member of the Charter Club and participated in speech activities and intramural athletics.

Following graduation, he joined the management training program at Cargill Incorporated in Minneapolis, MN. His 36 year career with Cargill included domestic and international grain merchandizing, handling and transportation with an emphasis on export trade and markets. At various times, he lived in New York City, Chicago, and Minneapolis. In addition to operating responsibilities, he was regularly involved in the public and government affairs of the corporation as someone who could advocate policies to Congress and executive branch from a pragmatic standpoint.

After retiring from Cargill in 1990, he joined World Perspectives Incorporated (WPI), an agricultural trade consulting firm, as Executive Vice President, becoming President in 1994. He retired from WPI in 2000 but continued as President Emeritus and consultant until 2020, which allowed him to pursue his passion for fly fishing. During his later years, he split time between Fairfax Station, VA and Southport, NC and enjoyed time with his extended family, dog Winnie and taking fishing trips out West.

A visitation will be held on Friday, May 21st from 5-7pm at Signature Funerals, 406 E. Bannister Rd, Ste D. Kansas City, MO 64131.  A private graveside service will be held on Saturday.