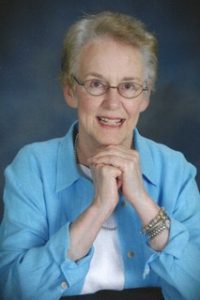 While teaching elementary school in Roswell, New Mexico, Suzanne met her husband Erwin D. “Dusty” Rhodes who was stationed there as a First Lieutenant with the Air Force. They were married in 1956 and lived in Massachusetts, California and eventually settling in Overland Park, Kansas in 1966 where they raised their three children.  They were married for 61 years.

Because education was important to Suzanne, she and her sisters-in -laws, Gail Van Reen Acuff and Dee Danford Acuff established an endowed fund in education at the University of Missouri.   She was active in the community serving as a Musette for the Kansas City Museum, a member of P.E.O, the Kansas City Pi Beta Phi Alumnae Group, Rolling Hills Presbyterian Church,and was an avid traveler.

Suzanne was known for her easy-going nature, wonderful sense of humor and ability to always make everyone feel wanted and welcome.  She had the ability to only see the best in everyone she met. Devoted to her family, she will be remembered as a loving wife, mother, grandmother, and great-grandmother. Suzanne was a promoter and active participant for 50 years in the annual ‘Big August’ family reunion held in Branson, Missouri.

Thank you to Kansas City Hospice and Palliative Care for their loving care,and the special caregivers from Synergy Home Care.

In lieu of flowers or memorial contributions, Suzanne would want you to hug a family member and take them out to lunch.

Burial will take place at the Lee’s Summit Missouri Historical Cemetery and a private family Celebration of Life in the spring.