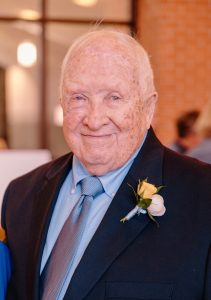 William Omar (Bill) Deatherage passed away on Sunday, January 16, 2022.  He was born on May 30, 1935, in Kansas City, Missouri, to Omar and Frances Deatherage.  He attended Northeast High School and in 1953 joined the United States Coast Guard, where he served until 1957.  He then went to work at TWA, where he remained until his retirement in 1991.

In 1966 Bill married Patricia McBratney.  Together they raised two sons, David and Matthew.

Bill was active in the community.  He served on the Center School District School Board.  He was scoutmaster for his two sons and enjoyed many campouts and other adventures.  He was a friend of many – the World War I Museum, the Kansas City Zoo, the Nelson-Atkins, the TWA Museum.

While Bill had and made many friends throughout his lifetime, what brought him most joy was his family.  He was often heard bragging about his sons, daughters-in-law, and grandchildren to anyone who would listen.  His grandchildren were precious to him, and he was most happy when all the family was gathered together.

Bill was preceded in death by his parents, brother Robert, and granddaughter Sarah Deatherage.

I feel absolutely certain that Bill Deatherage never met a stranger. He made a point of meeting people whenever and wherever he went. My wife Jo Marie and I had the privilege of becoming longtime friends of Bill and Patti one morning when Bill walked over and introduced himself and Patti to us while we were having coffee at Einstein’s in Prairie Village. After that, it was fun just watching Bill “work the room” — walking up to strangers, with a big smile on his face, and introducing himself. He was a loving husband, father, father-in-law, and grandfather, who took great pride in the accomplishments of his family members. Jo Marie and I will miss Bill and his kind heart dearly.

Pat and family,
My sincere condolences on your loss. I was so happy to have reconnected with Bill on Facebook. We had many years at TWA. May the good memories help you through the grieving process.

One of my favorite people in the world. Such great memories and fun I had with Bill and Pat. Much love and prayers to the Detherage’s, Ricky Frank