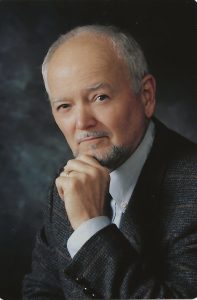 On August 16th, 2021, William Robert Judd Ballard, loving husband and father of four children,  passed peacefully in his home at the age of 91.

Bob began his decades–long career in the insurance business, before meeting Mely Ong, which led to their marriage in 1994.  They joined together and continued to operate Mely’s Yogurt & Ice Cream in Prairie Village, KS, where Bob enjoyed greeting and meeting people until their retirement in Feb, 2020.

Bob was one of a kind and lived his life on his own terms.  He was a big character who gave the best hugs and loved his family fiercely.  He will be dearly missed.

Bob was preceded in death by his first wife, Doris, his mother Irene, his stepfather, Leon Ballard, his biological father, Glenn Judd, and great–grandchild, Chase Weiland.

I will miss our weekly conversations out front of our stores. Always a smile and a kind word.

Prayers and blessings my friend. Bob was a sweet and gentle Soul. Lifting him up in prayer

We will keep the memories of Bob and Mely at the ice cream shop in our hearts. He always greeted us with a smile. The girls enjoyed seeing him there. We will miss him. Prayers.

Our prayers to Mely and family. May Bob Rest In Peace ??.

i share so much sorrow to your loss. Please accept my sincere condolenxes.

Dear Mely,
I’m so sorry for your loss. He was always so friendly – as were you. He very obligingly crisped up/seared my hot dog or brat when he was grilling while I shopped at Hen House. I and I know many others miss you at Mely’s.

Mely, Keith and I send our thoughts and prayers for you and your family.
Fondly
Vicki Novorr